Jen Ledger, epic drummer and serenading vocalist for world renowned and Grammy nominated rock band Skillet just announced she is working on a solo project. Ledger signed with Atlantic Records and Hear It Loud. “From when I started working with Skillet 10 years ago, I was immediately impressed with how vibrant and talented Jen Ledger is,” Pete Ganbarg, President, A&R, Atlantic Records shared with Billboard.  “Her … END_OF_DOCUMENT_TOKEN_TO_BE_REPLACED 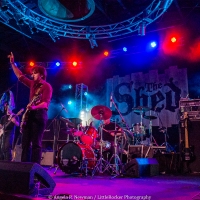