Amy Corey just released her newest single “Brooklyn”. A song that draws out stories of love. A song of honest words and perfectly written lyrics, paired perfectly with Corey’s beautiful vocals makes this song bring a WOW factor like no other. A raw and silvery voice of Amy Corey makes the tune “Brooklyn” an easy repeat. A steady drum beat in the background as her powerful dynamic vocals makes the track complete. A beautiful voice that also is fueled by a desire and passion for music that is a recipe for success in the musical world. It is going to be interesting to see where this single takes Corey and how her journey develops. 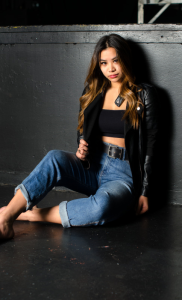 Endorsements from MAC Makeup, Bombay Hair, and Jojo Rings; Amy Corey has gained popularity as her fan base continues to increase rapidly.  Amy Corey had the opportunity of a life time when she performed alongside Dolly Parton to honor Kent Wells.  Corey recently performed at Holt Camp in Oregon, a camp for adopted children and their families. This hits extremely close to home as she was an a adoptee originally from Da Nang, Vietnam herself and also attended this same camp as a kid.

“Everything I have been through has made me who I am today. Every experience gave me wisdom and the strength to grow. I think the thing that is most different is that I am “myself.” Even though I could be hated for being myself — whether it’s my race or my scars or my look — I don’t care. I won’t change myself because of anyone’s opinion. I want to be a change, so maybe in five years when people see an Asian Country singer or singers with scars, people wont judge, and I think it’s time for that change to start. I’m ready to make that change, to inspire and make a difference in this world.”

She has heart and she has battled along the way to get to where she is but that’s what makes her who she is. Ready to make a change in the world and country music is the best starting place. The home of story telling. Her producer is Kent Wells, one of the worlds more renowned producers in country music. Having his helping hand in the careers of the likes of Dolly Parton and Reba McEntire. At only 21 years of age Amy Corey has the world at her finger tips.

You can visit her website for more information and news HERE!