New York based Heavy Alternative Rock Band N.a.s.H. has released both an official lyric and live performance video for their single, ” “D.i.t.c.h,” off of their newly released LP, Incredible Villains.

“’D.I.T.C.H.’ is sort of the most honest description of love and love’s role in a relationship, from our collected perspective. Ranging from how Incredible it can be to how damaging it can be, to how all enveloping it can be.” – N.a.s.H.

“Love can take you to the highest of highs to the lowest of fucking lows, ‘D.I.T.C.H.’ Is definitely a song best served as ‘open to the listeners’ interpretation’. This was an easy selection as a second single because it also shows our range as a band…it is by far the heaviest song on Incredible Villains, and definitely explains how heavy metal and rock have played a huge role in shaping us not only as musicians and songwriters, but as people. We hope that people listen to the words and can relate it to a relationship in their lives.” – N.a.s.H. 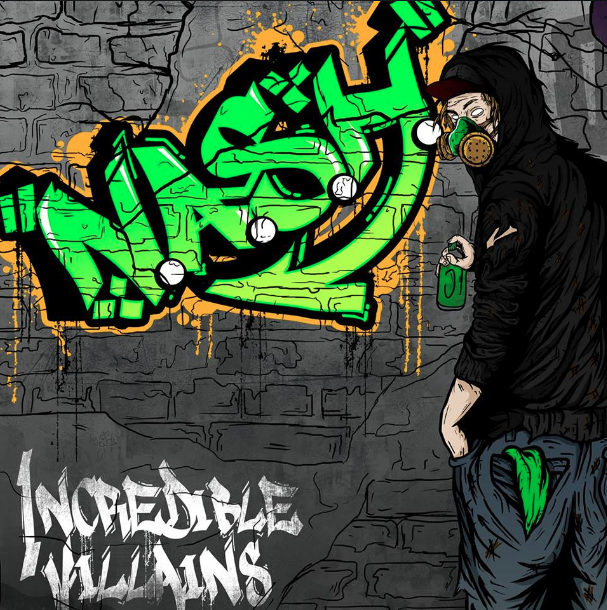 N.A.S.H. is the type of band where all it takes is one note, one beat or one nudge from the fan next to you, a fan swaying to the band’s infectious music and charismatic live performance reminding you to forget about the day’s stress’ and to enjoy the show.

Hailing out of a small town not too far from New York City, N.A.S.H. came to fruition when a triad of brothers took their basement jam sessions to a whole new level of musicianship. At a young age – Bryan, Jim Bobbi, and Joe began their venture jamming to nostalgic hits from bands like Metallica and Pearl Jam. As they got tighter and developed their own sound, the brothers took to crafting original material that would speak to a wide audience and give them a platform to take their music to the masses.

Their music maintains a blend of hard rock adaptations that heavily incorporate crunchy guitars, epic solos, solid back beats, commanding bass lines and vocal passages that can woo even the most stubborn of music connoisseurs. N.A.S.H. is sure to captivate any fan with their catalogue of music regardless if it’s fast and loud, heavy and heart wrenching or a tune you can simply bang your head to as if you’re sitting in the back of Wayne and Garth’s blue flame-painted 76’ AMC Pacer.

As N.A.S.H. developed, they brought in the talented Dylan Johnson on lead guitars that resulted in an awesome live wall of sound and allowed fans to enjoy the music as it was recorded. The band has independently released their acclaimed debut Regain the High Ground and is currently in the works of preparing the release of their highly anticipated sophomore release titled Incredible Villains.

“Our performances are meant to bring back the age of big rock stage shows that leave your ears ringing, your neck strained, and your heart wanting more. Our fans are our friends, and they are the people we need to get our music to.” – Nash