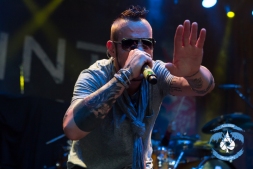 Day (and current Eye Empire) bassist Corey Lowery. As soon as they hit the stage Gontier took over the crowd. Never before had I seen an opening band with as much charisma and stage presence as Saint Asonia. You can tell they are old pros. They played a fairly short set that ended with their single “Let Me Live My Life”. They even threw in a Three Days Grace cover.

1.Fairy Tale
2. King of Nothing
3. Dying Slowly
4. Better Place
5. I Hate Everything About You (Three Days Grace cover)
6. Let me Live My Life

Next up was Alter Bridge. As the pavilion steadily filled to the brim, Myles Kennedy and
crew took the stage. Myles is one of those talents that you do not see very often. His vocal
range mixed with his stage command make him one of the best front men I have personally seen. Backing Myles are band mates and former Creed members, Mark Tremonti, Brian Marshall and Scott Phillips. The crowd was roused into a frenzy as they began to play “Addicted to Pain”. Between Mark Tremonti’s guitar solos and Myles’ vocals, the performance was flawless. If you have not seen an Alter Bridge show I encourage you to do so. You will not be disappointed. 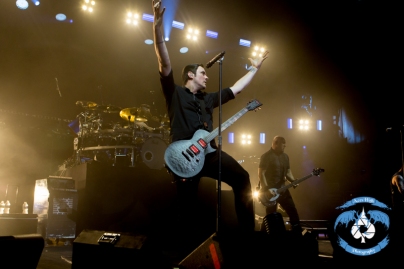 After the awesome set from Alter Bridge, Breaking Benjamin took the stage. The
band that was formerly on hiatus due to the health of singer Benjamin Burnley.
Legal battles with former members caused the band some set back but they have hit the ground running with their most recent album Dark Before Dawn. Sporting four new members to accompany Burnley, the most recent boasts four hit singles. Behind Burnley is Guitarist and back up vocalist Keith Wallen (formerly of Adelitas Way), Bassist Aaron
Bruch, Guitarist Jasen Rauch, and Drummer Shaun Foist. The band opened with their hit “So Cold”. It was a set that I didn’t want to end. Hit after hit it was nonstop Breaking Benjamin classics and featured songs from the new album to boot. The band played a mashup of the Imperial March mixed with songs by Tool, Nirvana, and Pantera.

1.So Cold
2.Angels Fall
3.Sooner or Later
4.Blow Me Away
5.Imperial March/Schism/Smells like Teen Spirit/Walk
6.Polyamorous
7.Ashes of Eden
8.Believe
9.Breath
10.Failure
11.Until the End
12.I will Not Bow
13.The Diary of Jane

As Breaking Benjamin’s set came to an end, everyone was getting amped up for Disturbed to take the stage. Unfortunately, so was Mother Nature. Before heading to the photo pit, we were all keeping an eye on the sky and the radar which was tracking some pretty crazy storm cells. The show must go on and indeed it did. We took our spots next to the stage and then the video montage began. The crowd was going insane and the band was not even on stage yet. It was setting up to be a killer show. Once the montage ended, the guitar riff for “Ten Thousand Fists” started and the place erupted. When I last spoke with
David Draiman, he said that the return of Disturbed would be a grand event and he was right. There were many instances where pyrotechnics were used and the ground was shaking beneath my feet as Blossom Music Center roared with intensity. As the band finished the fourth song of the set, “Prayer”, the weather started to take a turn for the worse. Trees were falling, flags were being ripped by the wind, the rain was torrential. The lightning rivaled any light show. Draiman began to read an announcement that was handed to him stating that the extreme weather would cause delay. The crowd was told to seek shelter.  Due to Blossom’s spacious lawn seating, people began to flock into the pavilion, merchandise booths, or anywhere shelter was available. 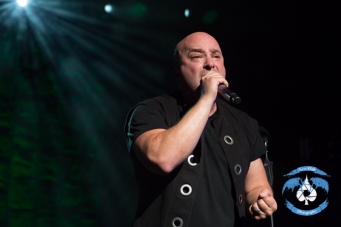 Most bands would lose energy from this. Not Disturbed. They came back after  a 20-30 min weather delay and rocked the house. At one point, Dan Donegan traded his guitar for a piano during their cover of Simon and Garfunkel’s “Sound of Silence”. Draiman’s 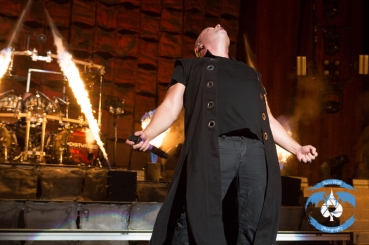 haunting vocals sent chills down my spine as Mike Wengren stood behind him providing back up on two Timpanis. Disturbed finished their amazing set with “Down with the Sickness”. It was a night to remember for sure. Everyone in Northeast Ohio certainly knew Disturbed had returned. Make sure you check out a show near you. Disturbed is touring the U.S. through October.

1.Ten Thousand Fists
2.The Game
3.The Vengeful One
4.Prayer
5.Liberate
6.Stupify
7.The Sound of Silence (Simon and Garfunkel cover)
8.Inside the Fire
9. The Light
10.Stricken
11.Indestructible
12.Voices
13.Down with the Sickness

Check out the complete slideshow from all of the bands!