UK and Japan based Cinematic Electro-Metal band SEASON OF GHOSTS has released the official music video for the title track off of second full length album, A Leap Of Faith, which released physical and digital copy 10/23/2018.

“A Leap of Faith came to life, as the result of our collective experiences since the creation of ‘The Human Paradox’ and although one could say that four years is not such a long period of time, a lot has changed within and without, on every possible level. Every challenge, of course, is an opportunity in disguise, as well as a valuable lesson, so me and Sam attempted to put this into music and words. In a Leap of Faith, as well as everything I’ve ever worked on, every word has a purpose, every note, every meaning has been carefully selected with intent. We do not believe in fast fashion, fast art, therefore we create slowly, hoping that our songs will mean something to someone in the years to come. This album bears significant emotional weight for us who created it, existential intensity, but also it’s very pleasant to the ear, easy to listen, hopeful. We feel it conveys a straightforward, honest, loving message to those who’ll let it be their life soundtrack for an hour or so.

For the needs of A Leap of Faith, we combined our musical influences, spanning from Japanese visual kei, to American rock, to European metal, inviting our friends from all over the world to contribute with their unique musical style, Fatal FE (ex-Fail Emotions) from Russia, who was in charge for most keyboards, Masaki (This is a PEN) from Japan, who played piano on ‘You Are Not Your Pain’ and of course Mr Fusix who worked his magic on the mix and master. My good friend Intetsu from Japanese Visual Kei band, AYABIE, handled all photography and videos, the ethical, ethnopunk UK brand, Psylo, took care of our costumes and Sam along with Paul were in charge of art direction. Looking back, it’s so surprising that sometimes darkness can create something so harmonious, beautiful and full of light.

A Leap of Faith is not a concept album like the previous one, but undoubtedly it has a concept if one connects the dots. It emerged during a prolonged period of mental, emotional and physical drought, so it bears a certain level of rawness in its sound, its artistic concept, the photography, the aesthetics, which comes in contradiction to the more lavish atmosphere of ‘The Human Paradox’. I am in no way denouncing my beliefs or my style, I just happen to like lots of different things and everyone deserves variety, so this album has been tasked with the mission of conveying our message in a more laconic, no-frills -literally-, straightforward way, It’s a bittersweet memoir and a peculiar, daily life user manual for those who dare to listen closely. For me, A Leap of Faith is the music of the spirit, soul- nurturing, it means to offer insight and love, but you, the listener, can take whatever you need from it.” – Sophia (Vocalist and main song writer) 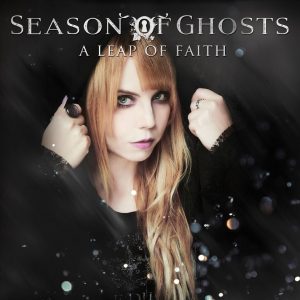 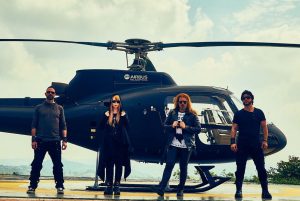 Season of Ghosts “is a spiritually ground breaking, intergalactic music project, dedicated to the love for the unseen and film soundtracks.” Released in 2014, the project’s official debut, “The Human Paradox”, came off as exactly that, serving up a brash mix of guitar riffs, harsh electronics, and compelling vocals through the eerie spectrum of a sci-fi, horror movie.

Season Of Ghosts was definitely something different from the norm that spoke of huge potential, and the fanbase that followed Sophia in the aftermath of her split from Japanese trance metal act Blood Stain Child grew, finding deeper roots as time moved forward, thanks to a handful of live shows and subsequent video clips that were circulated and shared via social media.

In 2017 Season Of Ghosts created a new, unapologetic, in-your-face album, A Leap Of Faith. Between the creation of The Human Paradox and the birth of the new album, Sophia spoke out about the health issues that prevented her from advancing and creating. Everything that transpired those past years, weaved the lyrical theme of the new songs.
“I spent years in depression, feeling helpless, lost, feeling captive,” Sophia explains of her full stop on making new music. “I stopped doing anything that once made me happy, including music.

Sam, Paul and Max had been trying to talk me into working for the new album for at least two years, but I couldn’t respond. Eventually, I understood I couldn’t procrastinate any longer and I asked Sam to start making some rough chord progressions that I’d work on later. Sam tends to be very concise about his compositions, so the core of the album sounds more solid. The main melodies, base keyboards, hooks and vocal lines were made by me, so you can tell there’s diversity because I’m a colourful character with many influences and I just can’t pick two to focus on.”

The Human Paradox was an experiment, born of Sophia’s desire to express her creativity and reveal herself to the fans who had affectionately been following her for years. It was also an opportunity to explore paths she’d always wanted to take but couldn’t due to having a lack of creative input in her former band. A Leap Of Faith is not only a continuation of Sophia’s tale, but a new chapter in the life of the band Season Of Ghosts.”An honest, in-your-face, loud statement, a reminder to ourselves that we’re still alive,” says Sophia. “It’s a piece of our soul, raw, the way the universe whispered it to us.”
The Human Paradox was as unconventional as the person who brought it from dream to reality, a reflection of the inner workings of Sophia’s mind. Thus, the album’s diversity and sometimes unexpected twists are a direct result of her having so many musical influences and her wanting to unleash them all simultaneously. A Leap Of Faith is more compact and defined in sound, certainly heavier and faster than its predecessor, and the strongest, most dynamic vocal showcase of Sophia’s career.

The trance / electronic elements of the Season Of Ghosts sound have, up to this point, been the elephant in the room. Many believe that once a metal band embraces electronics they cease to be metal, or have at the very least diluted their sound. A Leap Of Faith doesn’t shy away from the trance sound, which has become a Sophia trademark, but all the performances on the album are completely organic, including the keyboards. And the auto-tuning of Sophia’s voice that plagued her following her one and only album with Blood Stain Child is nowhere to be found. All the voices on A Leap Of Faith are 100% real and mixed up front on purpose. All performances are real, including keyboards that were done by Fatal Fe. He programmed some things, but several arpeggiators and keyboards were made piece by piece, constructed from zero.”

Sophia feels A Leap Of Faith has the feel of a traditional 4-piece band, a 5-piece if you add Fatal Fe’s invaluable input. There’s no question the Season Of Ghosts dynamic as presented on the The Human Paradox has changed 100%, and ultimately for the better.