“‘Synaptic Free Zone’ is a fun song about something that is not so fun.

The reality that we are all sheep following a blind destiny ordained by giant corporations that manipulate and orient us in ways that suit their business model, which is..’Don’t question, just follow, consume, and continue to be just a small number in their algorithm of pawns and deception’.

The Synapse is a junction between two nerve cells, consisting of a minute gap across which impulses pass by diffusion of a neurotransmitter. If we’re not thinking for ourselves we are in essence ‘Synaptic Free’.” – Luis Accorsi 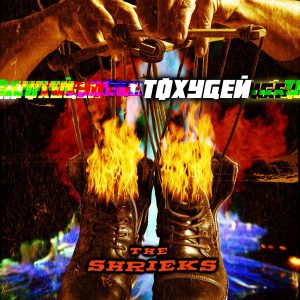 The Shrieks is Luis Accorsi (aka Tito Lembi) based out of Brooklyn. Luis and his fantastically talented friends are the synthesis of pure, unadulterated, meaningful protest rock. Toxygen is relevant to our times and original, incredible music. It takes us further into being a protest band, but not all our music has to do with the state of the world. It has to do with the state of us as humans: in love, distraught, downtrodden, happy. Our tracks are about never being apathetic. We make our feelings known, and what comes from the heart, gets to the heart.