Imagine traveling through the old west, an arduous journey filled with outlaws, bandits and tumbleweeds. These are the images that come to mind when listening to The Hardways, a saloon rock band based out of Phoenix, Arizona. Fronted by Gingher Leyendecker, the band has been playing to rowdy crowds since 2004.

Q: Speaking of rowdy crowds, tell me how saloon rock is defined? Obviously, I listened to the album Whittle it Away but I’m reluctant to lump the sound into one genre.

A: Hi Amanda! First off, thanks for having us! We’ve been reluctant to lump the sound into one genre as well. The term “Southwest saloon rock” was what we came up with after hearing ourselves described as everything from cowpunk to rockabilly to southern rock. None of those exactly fit and at the same time they all do for some of the songs. 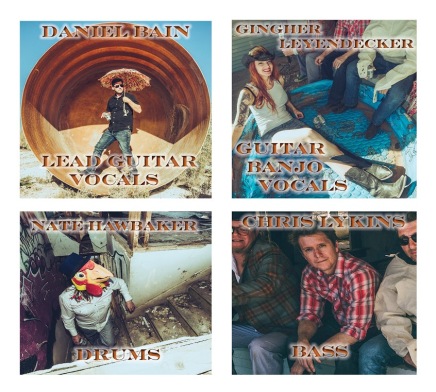 Q: Americana seems to heavily influence your sound. How did this come about?

A: I think it’s where we all come from. Dan hails from Oklahoma, I’m from New Mexico, and Nate and Chris are from Arizona. While we love all music styles from old school country to punk, our particular mix seems to come from our combined roots and varied styles of playing.

Q: This question is for Christopher Lee Lykins. Tell me a little about your style. How does it differ from a rock bass player’s style?

A: From Chris: I would say my style is hopefully a combination of R and B (which I love) and rock. It’s trying to mix some syncopation (little triplets here and there) with a strong groove that matches the drummer. I’ll try to sneak in little melody lines like James Jamerson when I can and stay out of the way in the country songs. My favorite bassists have been Jamerson, Stuart Zender, Steve Harris, and Bobby Vega…guys who make cool lines that are part of the song.

Q: You all have released four albums. Is there one of them which you are particularly proud of as a band?

A: Well they’re all pretty different in that I was the only member from the original lineup so the first album doesn’t have any of these guys on it. The next two had Dan and Nate on them and we were growing as musicians and as a band. This last album I think is our best because the lineup of musicians/writers is so strong. We also recorded this one at Studio Cat in Phoenix, which has made a big difference in the quality of the final sound.

Q: Has the band done any touring or opened for any other bands?

A: We’ve been through California, Utah, Arizona, New Mexico, Colorado, and Texas, and we are hoping to head out to Oklahoma this summer. We love playing with local and out of state bands and have made many friends along the way who we keep in touch with. It’s great because we all help each other find good shows to play when we’re in each other’s home states. Bob Wayne and Joe Buck were a couple of the memorable acts we’ve played with, but the southwest is so full of talented local musicians that we really enjoy getting out and meeting new bands.

Q: Tell me about a memorable gig?

A: We tend to play a real variety of gigs for a varied audience. Here’s an example of the last two weekends: Friday we played the Phoenix Freak Show with the Strange Family Circus, which included fire eating, an electrocution, and razor swallowing. Then the next day we played the Spartan Bikers’ Ghetto Blast, which is a huge party for all the local biker gangs. Next we played the finish line of the Red Dress Run for about 500 drunken hashers, all wearing red dresses, and then we finished the next night by playing a country show at Chopper John’s with our friends The Barnyard Stompers!

Q: Will you be playing any of the summer festivals out west this year?

A: We are playing the Saguaro Man festival next weekend, which is a Burning Man regional festival, and we will be playing the Arizona Hang Gliding and Paragliding Association’s Mingus Mountain Labor Day Flying Festival in August. Perhaps we’ll play some of the other summer music festivals as well. You never know where we’ll turn up!

Q: Personally, my favorite tracks on the new album are “Old Blacktop Road” and “Simple’. Who developed the haunting, minor banjo melody in “Old Blacktop Road”? And in the track “Simple”, which came first, the guitar riff or the lyrics?

A: Thank you for the positive feedback! I write the banjo music and was trying to come up with something that would reflect an endless journey of hard luck to mirror the lyrics “every home I pass is just another place I don’t belong.” For Simple, we used lyrics from one of Dan’s many notebooks. It was writing about his mother, who died in prison. I was really touched by the story and wanted to put together a composition that honored her. So it goes back and forth between the hard reality reflected in the way the verses are arranged, and the airy chorus that is supposed to reflect her spirit. If I don’t get goose bumps singing that chorus at the end, I know I didn’t do it right.

Q: The band is working on its fifth album now, is this right? Tell me a little bit about your current project.

A: The songs are written for our fifth album and we are about a third of the way through it. It should be great because in addition to Dan and Gingher doing the writing, we now have Chris writing. We like to play shows for a couple months before recording to continue to refine and rework if necessary. The actual recording could happen early next year. We’re not in a hurry, but new songs keep coming so we have to keep moving before we have so many that it’s time for a sixth!

Q: Hardways, thank you so much for taking the time to talk with me. What else would you like for the readers out there to know?

A: Thanks again for having us! Here are some weird facts about The Hardways: Chris is a face and neck surgeon who traveled the world before medical school as the lead guitarist in a metal band called Atrophy. Gingher is a college professor and is also the president of the Arizona Hang Gliding and Paragliding Association. Dirty Dan can fix or build anything in your house and made a living playing pool when he was younger. Nate teaches mechanics how to work on big busses and knows how to make his own moonshine! As different as we are, we all love playing music and hanging out together with our families and friends, and enjoy making new friends and family wherever we go!

You can check out more from The Hardways at www.thehardwayslive.com and on Facebook